We use cookies to ensure that we give you the best experience on our website. If you continue we assume that you consent to receive all cookies on all Manchester Place Partnership websites.
I accept
14/03/2018

That’s day 2 of MIPIM already done and dusted, with some of the leading players in property and place-making covering a range of topics on the Manchester Pavilion throughout the day.

That’s day 2 of MIPIM already done and dusted, with some of the leading players in property and place-making covering a range of topics on the Manchester Pavilion throughout the day.

This morning’s breakfast sessions ‘Aerotropolis: Cities Shaped by Airports’ saw Professor Greg Clark CBE moderating an interesting debate with points of view from Manchester, Stockholm, Oslo, and Amsterdam on why their respective airports play such a key role in the city. The session opened with Sir Richard Leese quoting Sir Peter Hall, that cities need two things to grow the economy; universities and airports, which gives a city, knowledge, skills, and connectivity. Anna Gissler, Chief Executive of Invest Stockholm, Adam Elzakalai, Deputy Mayor of Amsterdam Metropolitan Area, and Øyvind Såtvedt, Managing Director of Oslo Region Alliance gave the views from their cities, with both focusing on connectivity from Global connections to connecting with the local community around the airport. Lynda Shillaw, Chief Executive of MAG Property gave an overview of the new investment in Manchester Airport and the incredible businesses that are currently calling Airport City home. From driverless airport cars, to airport football stadiums, to a truly queue-free experience, the session finished by looking at the things we are expecting to see in the future in airports. 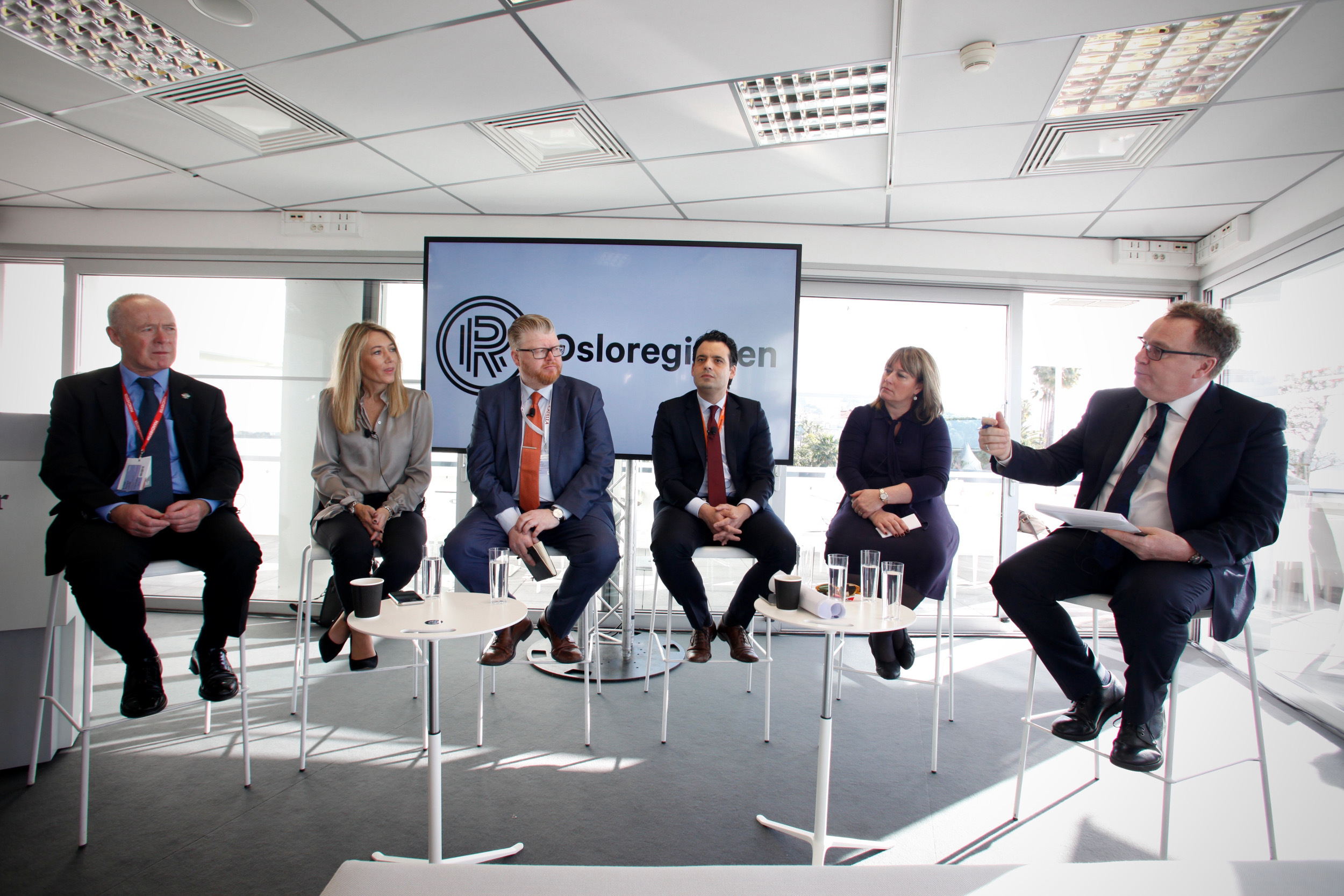 Our second session saw Tom Fenton, Project Director for Far East Consortium International, and Peter Swift, Managing Director for Planit-IE, deliver ‘A River Runs Through It: A Northern Gateway Vision’. The presentation set out plans for the Northern Gateway, and discussed 5 key themes to bind the huge opportunities available; the creation of new neighbourhoods, a new transport hub, the reactivation of Rochdale Road, the capitalisation on the heritage, and a brand new river city park. This vision was wrapped up in a commitment to deliver family and affordable homes that are accessible for all.

In ‘Changing the Game: The New Old Trafford’ Theresa Grant, Chief Executive of Trafford Council; Chris Oglesby, Chief Executive of Bruntwood and Gary Neville, Founder of UA92, took part in a session moderated by Sir Howard Bernstein on the new plans taking place in Trafford. The session focussed on the incredible opportunities in Trafford, tied into the brand new university that has an ambition to coach younger generation and disrupt the industry in a huge way. The University, looking at the media, sports and business industries will hope to bring in the best talent from locally and abroad, and shape them for the ever-changing business world. 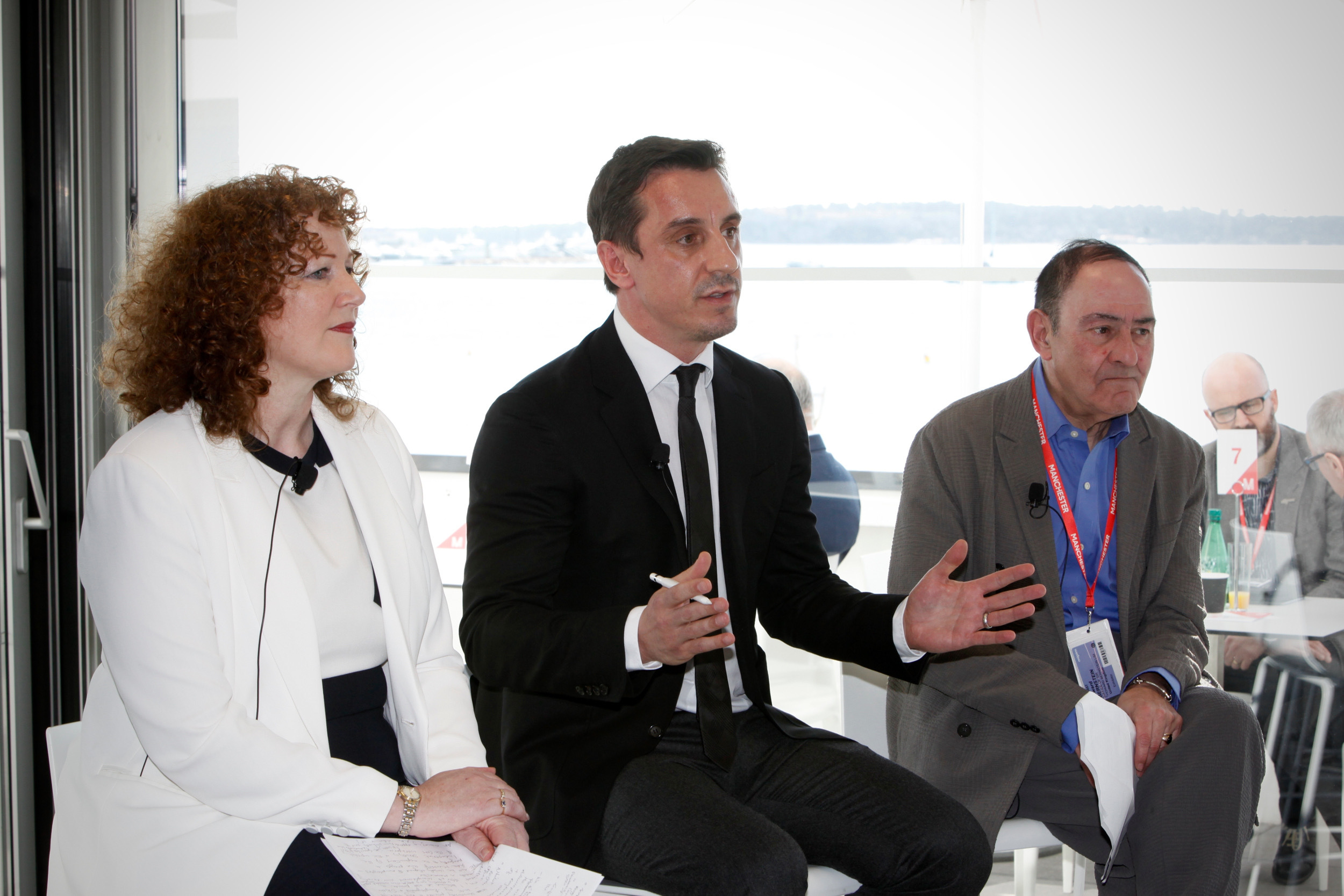 Our first session after lunch looked at ‘Natural Capital: A Green Revolution’. In this session, Chris Boardman, Cycling and Walking Commissioner for the Greater Manchester Combined Authority set out his vision for a greener and more active city. Alongside him, Chris Oglesby, Chief Executive of Bruntwood; Ed Lister, Managing Partner of Planit-IE; and Tina Saaby, City Architect for the City of Copenhagen also discussed their views on a cleaner and greener city. Moderated by Guy Montague-Jones, Associate Editor for Property Week, the debate looked at how to develop a strategy to promote healthy living, walking, and cycling within Greater Manchester. Ed Lister claimed that it has never been more important to get citizens connected with nature, a thought shared by the rest of the panel, and specific comparisons were drawn with Copenhagen, a city where over 50% of school-children cycle to school, compared to 3% in Manchester.

‘Abu Dhabi United Group & Manchester City Council: East Manchester's Next Chapter A World Leading Sports, Leisure & Entertainment Community’ was an eagerly awaited session with Sir Richard Leese, Leader of Manchester City Council alongside Marty Edelman, Board Member for City Football Group, and Strategic Advisor for Abu Dhabi United Group. Expertly moderated by Damian Wild, Editor for EG, Marty and Sir Richard outlined the new plans for East Manchester, with the vision of creating the finest urban sports campus in the world. The regeneration of East Manchester was key, with a number of leisure, education, and business facilities in the pipeline that will inspire younger people to live, work, and play in the area. The session touched on the way the project has grown, from the initial idea for Abu Dhabi United Group to simply purchase a football club, to delivering the promise made to Manchester of world-class football team, a commitment to the community, and a significant contribution to the regeneration of East Manchester.

The final event of another busy day was ‘Bolton: Premiership Development A Level Playing Field’. Moderated by Architect and TV Presenter George Clarke, the session brought together Directors from Bolton, Stockport and Oldham Councils with Andrew Flintoff, Director at Logik Developments and Adam Cunnington, Chief Executive of Public Sector plc, to consider what the regional town centres in Greater Manchester have to offer, and have to do in order to continue to regenerate town centres. The session started with an announcement from Stephen Young, Director of Place at Bolton Council, that Muse Developments would be bringing forward the fantastic Church Wharf regeneration scheme. Also within the session, Andrew Flintoff spoke about his career from cricket, to acting, and why he now loves the tangible opportunities presented by being a part of the property industry, and why he has an absolute commitment to developing projects that he is proud of, and that will stand the test of time.