We use cookies to ensure that we give you the best experience on our website. If you continue we assume that you consent to receive all cookies on all Manchester Place Partnership websites.
I accept
15/03/2018

The third and final day at MIPIM is over, and once again there’s been a jam-packed schedule of thought-provoking discussion and collaboration from our fantastic city.

Our final breakfast session of MIPIM 2018 looked at ‘Healthy Cities: Sport, Medicine & Liveability’. Once again moderated by the fantastic Prof. Greg Clark CBE, this session saw representation from Manchester, alongside The Hague-Rotterdam Metropolitan Area, and Helsinki to discuss how to make cities healthy. Sir Richard Leese opened the session and discussed how Manchester's 170,000 people currently employed in health and social care in Greater Manchester is a huge economic driver for the region. 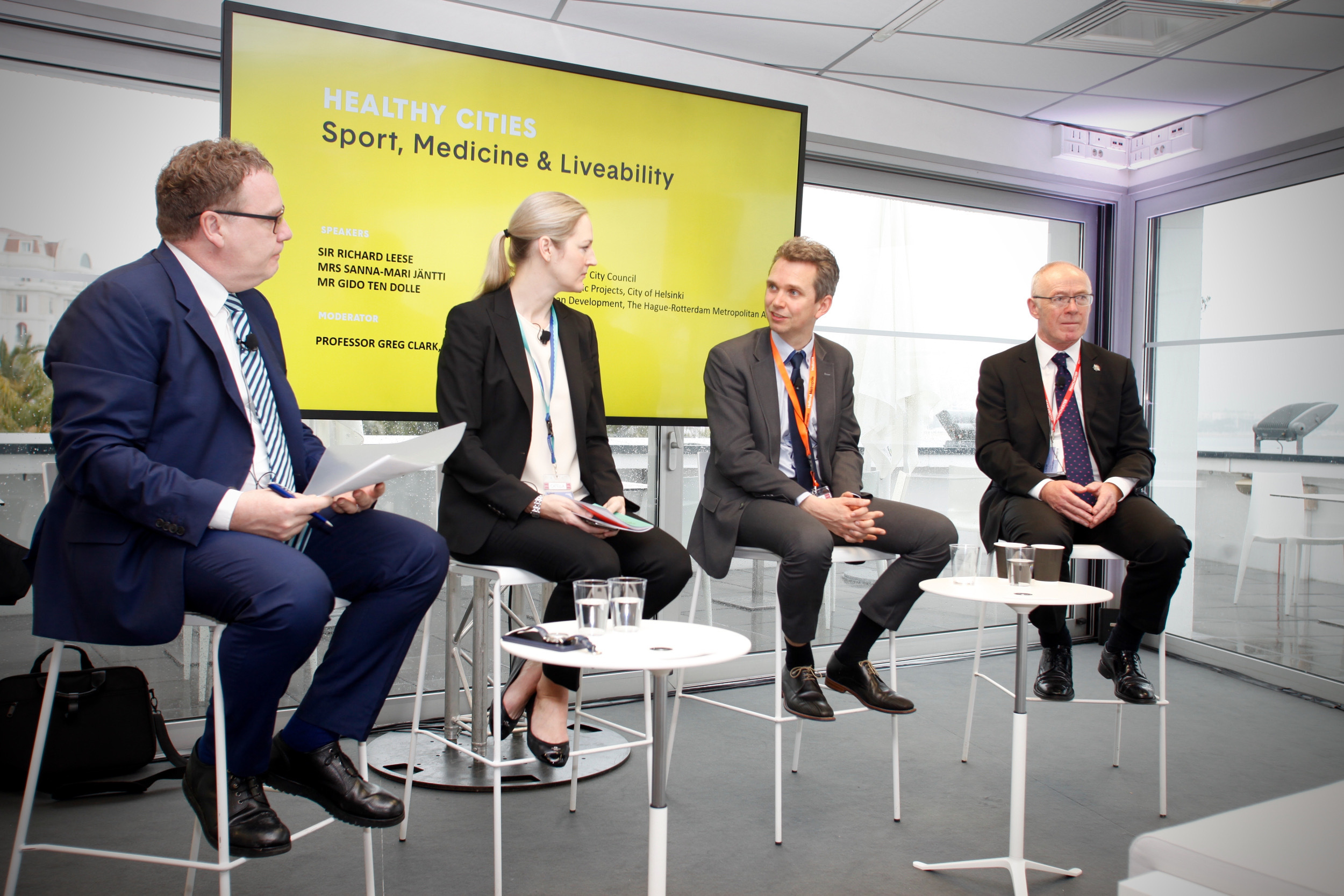 Gido Ten Dolle, Director of Urban Development for Delft described how the Netherlands also have a de-localised healthcaresystem, and how cities actively stimulate health awareness. Sanna-Mari Jäntti,Director of Strategic Projects for the City of Helsinki discussed the challenges of an ageing population, and how Finland has a national campaign in place to try and support independence for as long as possible. On top of this, Helsinki also has the challenge of people from family-oriented rural environments moving into the city for work, and therefore the city has to develop communities in order to combat the loneliness this can cause.

In ‘People & Productivity: A Strategy for Skills & Growth’ Stockport, Salford, and Trafford Councils came together to outline theirindustrial strategies. Pam Smith, Chief Executive at Stockport Council spoke about how the 5 key foundations of the strategy - places, people, ideas, infrastructure, and business environment - can really promote inclusive growth within the Greater Manchester region and the North. Jim Taylor, Chief Executive at Salford Council described the fantastic assets Greater Manchester has, from The Corridor to the National Graphene Institute, whilst Sean Anstee, Leader of Trafford Council described how the provision of skills can help drive productivity.

The third event of the morning, ‘Future Homes: People | Progress | Place | Planet’ saw a panel of Tom Bloxham MBE, Chairman and Co-Founder of Urban Splash; Architect and TV Presenter George Clarke; Deborah McLaughlin, Managing Director - Real Estate Projects at Capita Real Estate; and Nick Walkley, Chief Executive of Homes England, moderated by Martin Hilditch, Deputy Editor of Inside Housing. The session focused on the future of housing needs, and how factory built housing could present an opportunity to meet a changing demand in the market. The session looked at Urban Splash's 'House' as a case study to how this has worked in Manchester, as well as how George Clarke is hoping to inspire the younger generations to be excited about building homes. 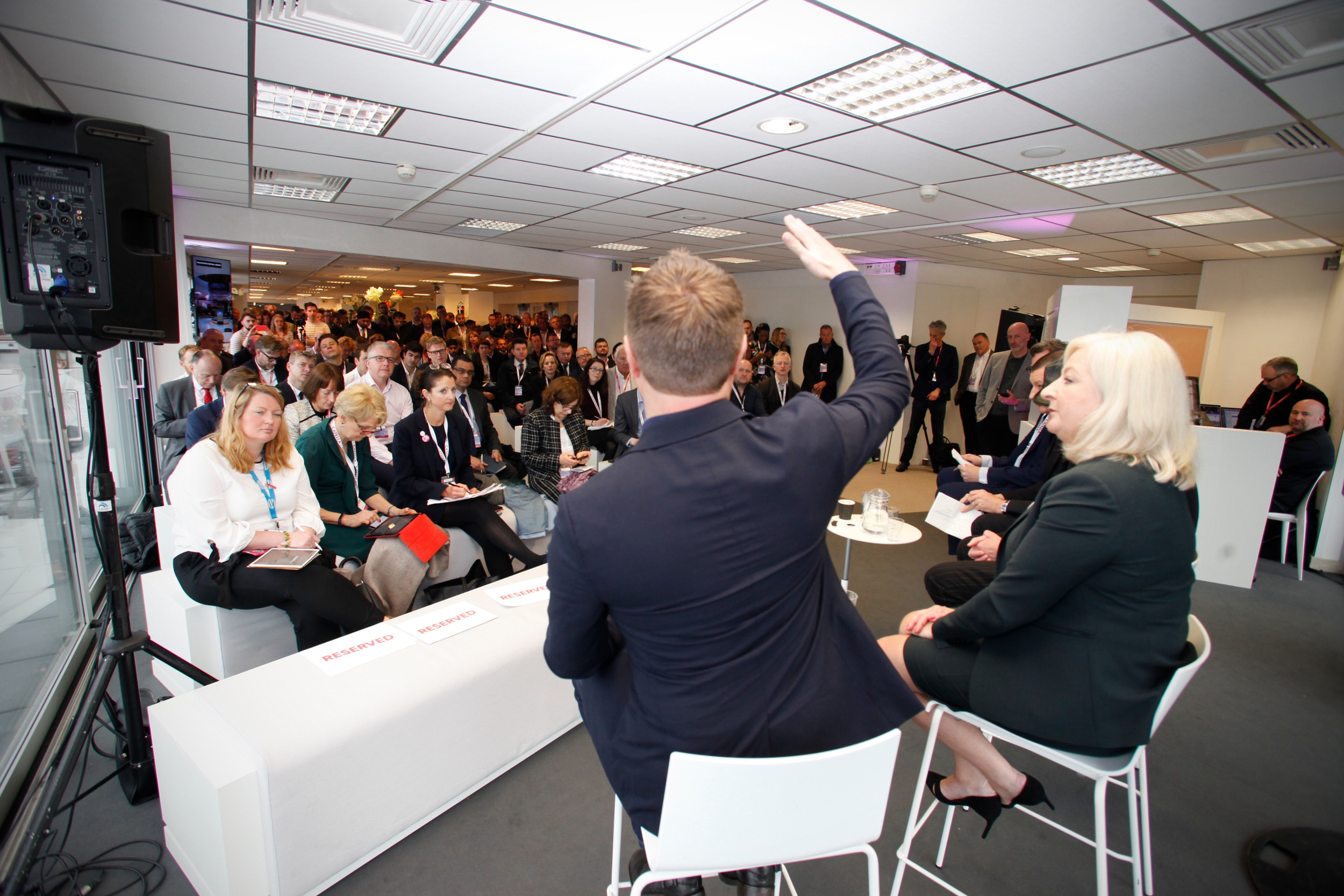 ‘St. John's & The Factory: The Spirit of an Era’ saw presentations from both Michael Ingall, Chief Executive at Allied London, and John McGragh, Chief Executive & Artistic Director of Manchester International Festival, on the fantastic future for St. John’s and The Factory. Introduced by Sir Richard Leese, the presentation ran through the incredible plans for St. John's and The Factory, as well as announcing an expansion to Enterprise City through the purchase of the former Astley and Byrom house, now renamed ABC.

Our final session of MIPIM 2018 ‘MIPIM Wrap Up: Manchester & London’ brought the two great cities together to discuss our collective strengths. In this event, sponsored by Addleshaw Goddard, CMS, and Shoosmiths, the panel consisted of Sir Richard Leese; Liz Peace CBE, Chair of Old Oak and Park Royal Development Corporation; and Cllr. Darren Rodwell, Leader, Barking & Dagenham Council, and Executive Member for City Development at London Councils. The light-hearted discussion covered the MIPIM highlights of London and Manchester, as well as the exciting plans across the cities, as well as how Brexit may impact the respective cities.

And that, as they say, is a wrap. Thanks to all of our partners and speakers for another fantastic MIPIM in the Manchester Pavilion. We will be sharing lots of content in the coming days including images and videos, so keep checking back to the Manchester at MIPIM website.