We use cookies to ensure that we give you the best experience on our website. If you continue we assume that you consent to receive all cookies on all Manchester Place Partnership websites.
I accept
26/02/2019

The Complete Guide to Manchester at MIPIM 2019

Manchester has attended MIPIM, one of the world’s largest international property market events, since 2000. In this time the Manchester at MIPIM Partnership has grown steadily along with the event, and today Manchester is one of the largest and most established city delegations in attendance.

Manchester has attended MIPIM, one of the world’s largest international property market events, since 2000. In this time the Manchester at MIPIM Partnership has grown steadily along with the event, and today Manchester is one of the largest and most established city delegations in attendance.

2019 will mark the 20th year that Manchester has exhibited at MIPIM. To mark the anniversary, the Manchester at MIPIM Partnership will launch a new campaign to put the city’s people at the heart of the city’s MIPIM activity.

Filmed and photographed against the backdrop of Manchester’s unmistakable aesthetic, ‘the people who make the place that shapes the world’ will a see a diverse cast of people who live, work and invest in Manchester brought together to create a snapshot of the modern city.

Through a series of life-size living portraits, thought-provoking soundbites, and short films, the Manchester Pavilion will show delegates the human endeavour, engagement and creativity that breathes life into the vast expanse of development opportunities across the city.

In this way Manchester plans to challenge some conventions of destination marketing, and to open important conversations around issues of infrastructure, housing, and sustainability to name a few.

Where can I find Manchester at MIPIM?

For 2019, a new design for the Manchester Pavilion will move away from a traditional exhibition pod layout, creating a space where people can gather, meet and start new conversations.

You can find the Manchester Pavilion here: 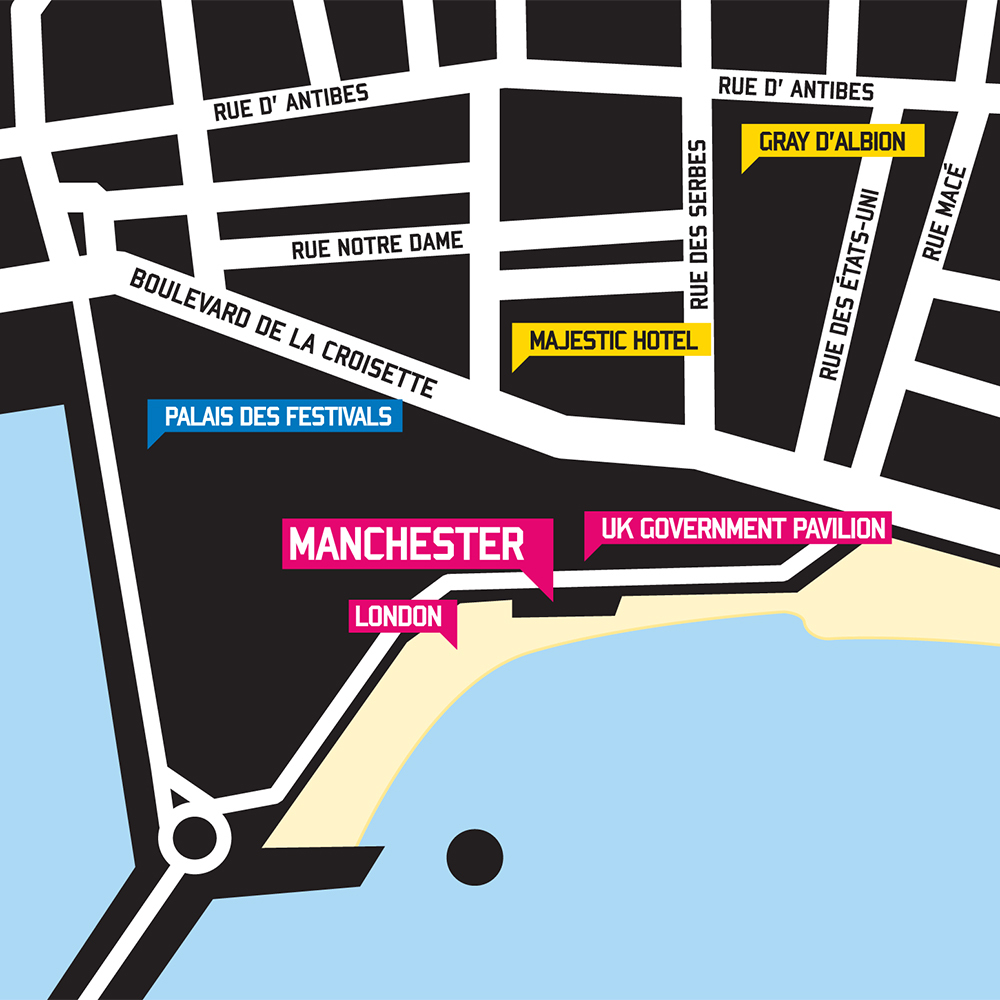 The Manchester Pavilion will be clearly signposted and can be easily accessed from the Croisette.

Who’s in the Manchester at MIPIM Partnership?

Manchester at MIPIM 2019 is represented by 97 companies and 214 delegates - expected to be one of the largest city delegations in attendance at MIPIM.

The full Partnership can be found at manchesteratmipim.com/partners-list.

What are Manchester’s main events?

Manchester’s popular European sessions will return for 2019, welcoming leading figures from some of Europe’s most exciting growth cities to the Manchester Pavilion for a series of lively panel discussions. Here Sir Richard Leese will be joined by prestigious speakers including:

On the Wednesday, ‘Carbon Neutral by 2038: Manchester’s Sustainable Future’ will see an influential panel deliver a ‘call to arms’ for the property industry to play its part in making Manchester a zero-carbon city by 2038. Speakers will include Andy Burnham, Mayor of Greater Manchester; Chris Oglesby, Chief Executive of Bruntwood; Helen Gribbon Director of Renaissance, and Raymond Johansen, Governing Mayor of Oslo.

Then, ‘Emerging Technologies: Driving New Workforces & Workplaces’ will announce the findings of a new extensive research project from The Data City, mapping Greater Manchester’s technology sector and identifying its strengths in emerging technologies. This research will then guide a panel in a discussion on how emerging technologies are changing the way Mancunians work; what new roles are being created and the skills required; and ways the property sector may have to accommodate this new way of working. Here Andy Burnham will again join the panel alongside representatives from OBI Property, Aviva Investors, MIDAS, and Bruntwood Works.

On the Thursday, Sir Richard will visit the UK Pavilion to join a panel of other leading figures from across the North of England at ‘Powerful Partners – Collaboration in the North’. Here Henri Murison, Director of the Northern Powerhouse Partnership will moderate a panel of senior representatives from Manchester, Liverpool, Leeds, Sheffield, Newcastle, Cheshire and Warrington, and Lancashire.

Then, returning to the Manchester Pavilion, ‘New Generation Thought Leaders: Empowering our Future Leaders’ will focus on the next generation of property professionals, and the importance of diversity and representation in future leadership. Here the North West Business Leadership Team (NWBLT) will present their ‘Future Rising Stars’ programme, and a panel will discuss how public, private and third sector organisations can engage and empower future leaders. Sir Richard will be joined in this event by representatives from NWBLT, Turner & Townsend, Bruntwood, Deloitte, and Property Alliance Group.

What if I’m not at MIPIM this year?

Watch all of Manchester’s stand sessions live during MIPIM at: www.manchesteratmipim.com.

Please note that the programme timings are in Cannes time - one hour ahead of UK time. If you’re watching live from the UK you’ll therefore have to adjust your timings accordingly.

What if I miss an event?

After MIPIM, videos of each session will be uploaded to the Manchester at MIPIM events archive: manchesteratmipim.com/events-archive.

How can I get involved?

To get all the latest during MIPIM, follow us on Twitter @mcrMIPIM and at the hashtag #mcrmipim.

All of our blogs, releases and videos can be found at manchesteratmipim.com.

Or just drop by the Manchester Pavilion any time during MIPIM, where our dedicated team can help you find what you need.